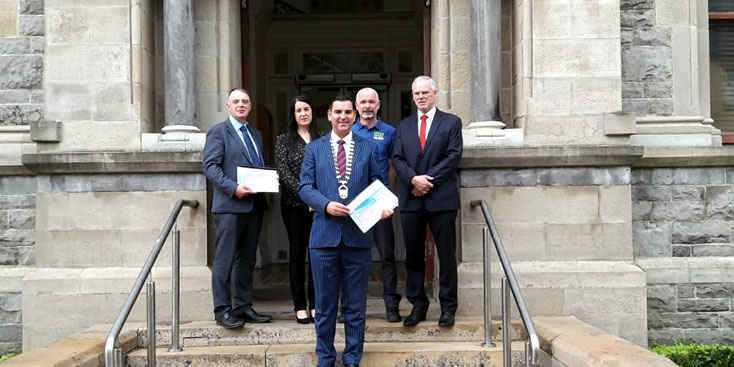 "This was an important step in relation to how the Local Authority will have to change the way it operates in the face of Climate Change”. "

“He was proud to witness how the County Council was unanimous in its decision to endorse the Strategy, given the level of concern that exists with citizens, businesses and community groups.

On Monday 2nd of September Sligo County Council unanimously decided to adopt the draft Climate Adaptation Strategy 2019-2024. This document, which recently went through a period of public consultation, will now be finalised and will be made available in the coming weeks. The Strategy contains over 40 individual actions, each of which will be implemented over the course of the next five years, and which will assist the Local Authority in adapting to the challenges posed by Climate Change. The actions relate to all of the sections within the Local Authority, but there are also actions which aim to assist communities and businesses here in Sligo.

The adoption of the CAS is also a requirement under the National Adaptation Framework, which requires all Local Authorities to have a Climate Adaptation Strategy in place by the end of September 2019.It also seeks to incorporate and complement some of the actions contained within the Climate Action Plan which was recently announced by Minister Richard Bruton.

One of the main issues that arose during the public consultation phase was the issue of energy efficiency and the reduction of our collective carbon footprint. These issues require additional and specific actions and Sligo County Council is currently working on a Corporate Energy Plan to ensure that we are meeting existing targets under the National Mitigation Plan. We intend to work closely with the OPW regarding energy use by the Local Authority, and with the SEAI in relation to how we can assist the people of Sligo to reduce their energy usage. One of the ways in which this will be achieved will be through the formation of Sustainable Energy Communities (SEC) throughout the County which will be able to identify projects in homes, businesses and community facilities and avail of the significant supports available for such endeavours.

Now that we have embraced the concept of Climate Change, and accepted that we need to act now in order to protect our collective future, we must ensure that the plans we make today are followed through on and that we build on any successful adaptation measures that we take. The Strategy will also be reviewed on an annual basis and will seek to include relevant topics and issues should the need arise.

Our Climate Awareness Campaign will run for the next six weeks and will cover topics such as energy at home, sustainable travel and greener business practices, as well as hearing from people from all around Sligo about their concerns and what they are doing to try to do their part.