nvasive alien species are animals and plants that are introduced accidentally or deliberately into the wild where they are not normally found, and which have adverse impacts on the environment, usually by out-competing native species for natural resources. Invasive species can have significant impacts on conservation and economic interests and may in some cases pose threats, directly or indirectly, to human safety. Reversing the damage of invasive species is a significant land management issue for public authorities as well as for private landowners and can be a costly and labour intensive exercise.

Transport Infrastructure Ireland is currently engaged in a long-term treatment approach of tackling IAPS with a view to mitigating the risks on construction projects in the future. The Management of Invasive Alien Plant Species Project, led  by TII, is a €5.5 million project aimed at managing invasive knotweed and other non-native invasive plant species on the national road network and its interactions with regional roads. The key objective of this project is to develop, implement and monitor a comprehensive national approach to the control and treatment of IAPS on the road network.

Initial works commenced in 2016 with 11 priority counties, including Sligo, being targeted for a rolling three- to four-year treatment programme. This year will see the rolling out of a second round of treatment contracts to National Primary routes in Sligo affected by IAPS

One of the most problematic invasive alien species is Japanese knotweed. This is an increasingly common sight on waste ground, the fringes of our waterways and roads and in our wetland habitats. It is now classified as one of the top 100 worst invasive species worldwide because of its serious impact on biological diversity, impact on human activity and its capacity to invade new environments. It is widely distributed across Ireland and is now a major management concern for public authorities.

How do you recognise it?

The stem structures are distinctive with a green hollow bamboo like appearance and dotted with dark blue purple speckles. Leaves are oval with a pointed tip, and have a distinctive zig-zag growth pattern on the stem. The off-white coloured flowers are small and clustered and hang from the joint of the stem and the leaf. They flower from August to October. The roots are tough, thick and wood like in their appearance. If snapped they show a bright orange colour inside and have a consistency similar to that of a carrot. New rhizome growth is white in appearance and can be delicate. These root structures can extend up to 7 m in a lateral direction (but usually only up to 5 m), and 2m deep from the over ground parent plant.

Japanese knotweed in flower.  During the winter season the stems become an orange brown colour which may stay in place for a number of years. The new growth during spring is indicated by shoots of a red-purple colour with rolled back leaves, growing rapidly along the length of the roots. 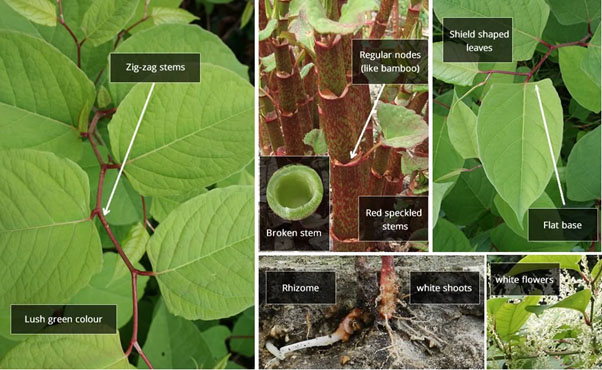 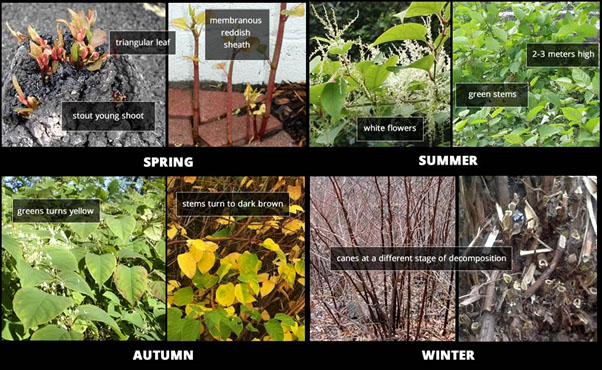 How did it get here?

Japanese knotweed is native to Japan, China, and parts of Korea and Taiwan. It was introduced to Europe as an ornamental plant in the 19th century. It quickly established wild populations and is now one of Ireland’s most unwanted invasive species posing a huge environmental and economic threat.

Where do you find it?

Japanese knotweed is now very common and widely distributed across a variety of habitat types in Ireland. It is most prominent on roadsides, waste ground and in wetland habitats where it out competes native species and forms dense thickets. It is now very well established along river banks, roadsides and on waste ground throughout the county.

Why should you be concerned?

What should you do if you find Japanese knotweed?

Prevent further spread If you do find Japanese knotweed on your property, the most important thing that you can do is prevent any further spread of the species. Do not strim, cut, flail or chip the plants as tiny fragments can regenerate new plants and make the problem even more difficult to manage. It is also advised not to dig, move or dump soil which may contain plant material as this may contribute to its spread.

Japanese knotweed can be controlled successfully through the application of appropriate herbicides by a competent person. However eradication of this plant requires planning, as follow up treatments are usually required, and consideration needs to be given to management and disposal of dead plant material, and to the treatment of contaminated soils. It is advised to prepare a management plan, and to get expert help before tackling any significant infestation of this species.

Help us in the fight against invasive species!

To record sightings and records of Japanese knotweed or any other invasive alien species,
Log on to the National Biodiversity Data Centre at