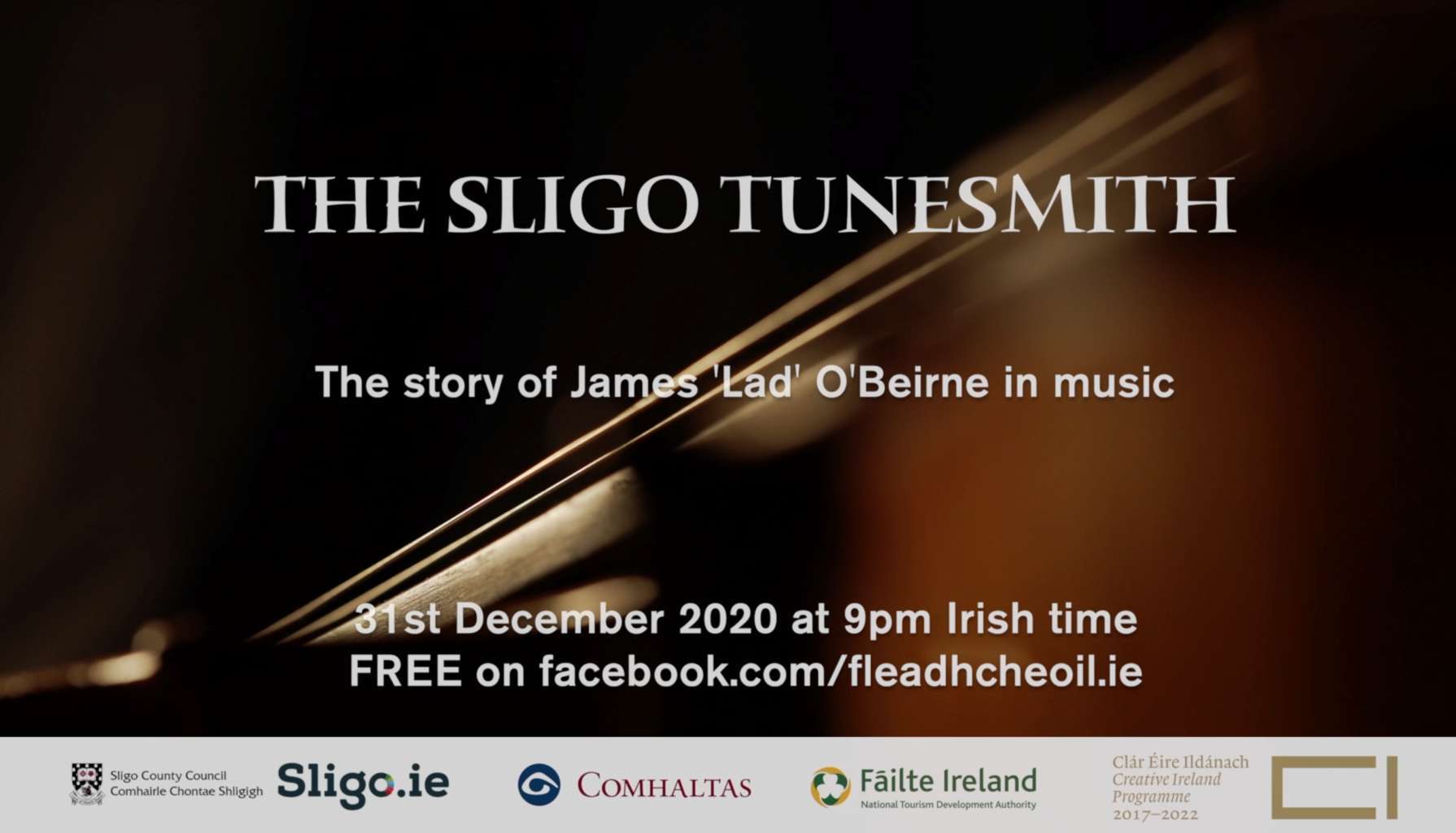 he programme, titled “The Sligo Tunesmith” will be broadcast on New Year’s Eve, 31st December next at 9pm (Irish time) on the Fleadh Cheoil na hÉireann Facebook page. Visit https://www.facebook.com/fleadhcheoil.ie to view the concert.

‘The Sligo Tunesmith’, features musicians from both sides of the Atlantic playing many of the tunes composed and made famous by Lad O’Beirne. O’Beirne was born in Sligo in 1911 and lived his adult life in New York. Because his arrival Stateside in 1928 coincided with the start of the Great Depression, the recording industry soon ground to a halt. Thus, unlike his fellow Sligomen Michael Coleman, James Morrison and Paddy Killoran, O’Beirne’s solo performances were not recorded professionally and so, he has remained something of a musical mystery. That said, he has been accorded almost mythical status by those who knew him, played in his company and learned his many compositions. He is equally revered by contemporary musicians and followers of traditional music.

The music of Lad O’Beirne was recorded, albeit mainly on basic domestic recording equipment. Nonetheless his credentials as a gifted and skilled musician shine through even in these recordings. And while Michael Coleman remains the doyen of traditional Irish fiddle playing in the ‘Sligo Style’, Lad O’Beirne was, in the opinion of many who knew him, very much the equal of Coleman. O’Beirne’s added creativity as a composer of many tunes popular amongst today’s musicians is further confirmation of his accomplishments and his legacy. Such tunes form the core of this musical homage.

Dorothy Clarke Director of Services with responsiblity for the Creative Ireland programme said ‘It is so important particularly at this very difficult time to reach out to the Sligo Diaspora and all music lovers world wide with an uplifting positive event. The programme will connect people across the world through creativity, heritage and community memory making’.
Musicians Oisín Mac Diarmada, Philip Duffy, Daithí Gormley and John Carty feature in ‘The Sligo Tunesmith’.

‘The Sligo Tunesmith’ is presented by Sligo fiddle player Oisín Mac Diarmada and features a host of great fiddle players and other performers and contributors in Sligo, New York, Miami, and elsewhere. The programme is directed by Micheál Ó Domhnaill of Sligo-based production company Omedia.

We will hear many Lad O’Beirne compositions, experience Sligo’s wonderful landscape and culture, and hear stories and anecdotes from those who knew and played with him. ‘The Sligo Tunesmith’ airs on the Fleadh Cheoil na hÉireann Facebook page on New Year’s Eve at 9pm (Irish time) and is brought to you by the Fred Finn branch of Comhaltas Ceoltóirí Éireann.
Comhaltas greatfully acknowledges the funding support and assistance of Sligo County Council, Creative Ireland and Fáilte Ireland in the making of the programme.

“The Sligo Tunesmith” will be broadcast on New Year’s Eve, 31st December next at 9pm (Irish time) on the Fleadh Cheoil na hÉireann Facebook page. Visit https://www.facebook.com/fleadhcheoil.ie to view the concert.