Skip to main content of
Conservation of Sligo’s Metal Man 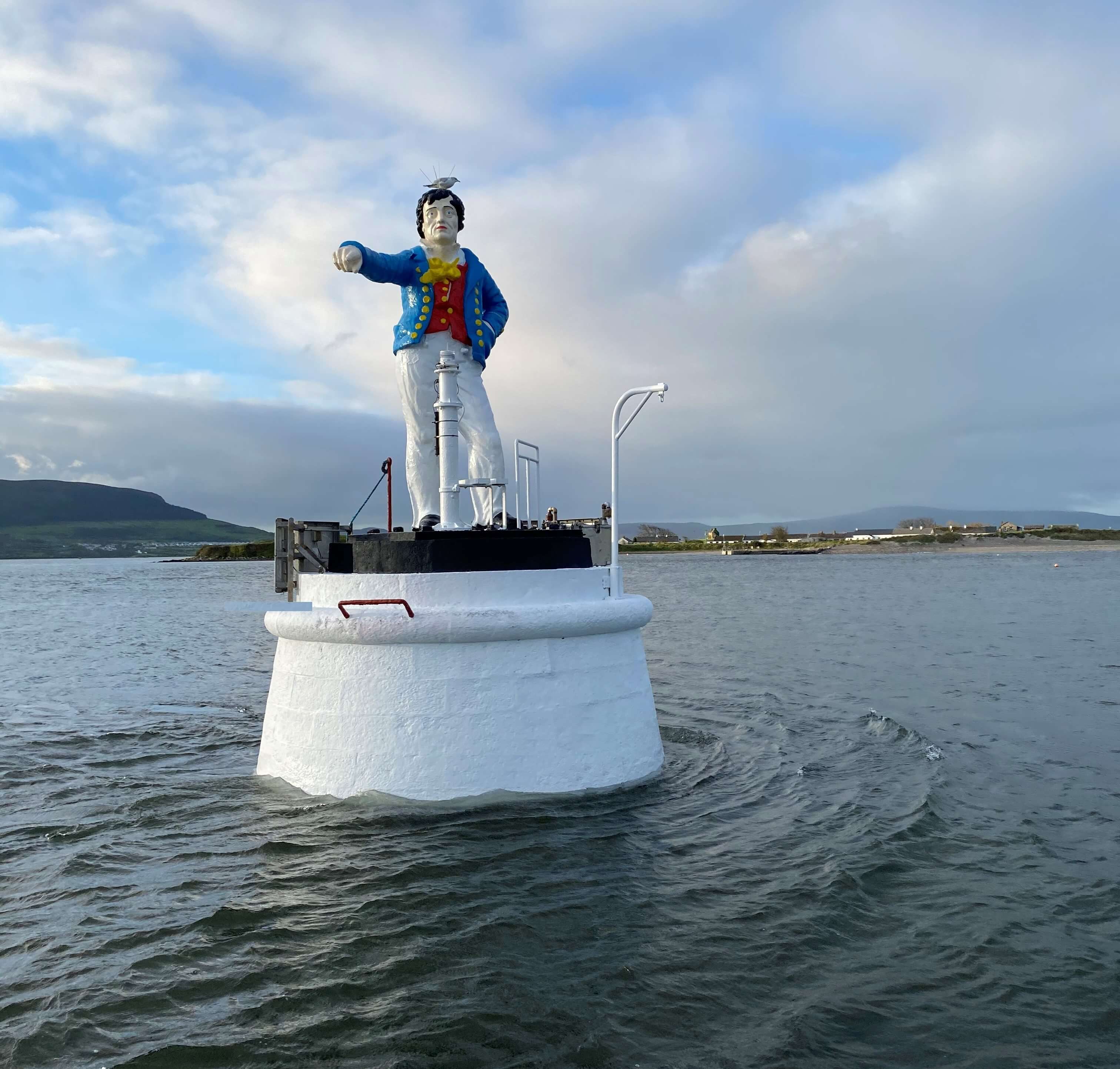 After spending almost four weeks cleaning, conserving and painting the Metal Man, it’s fair to say that Gavin Cogan and James Cawley of Maintenance Painting Systems (MPS) Ltd. have gotten to know one of Sligo’s famous landmarks better than most of us ever will.

Perched atop a limestone plinth, access to the 12 ft high navigation beacon was weather and tide dependent.  On some days only 2-3 hours were available for works to be undertaken.  Carefully and painstakingly the crew undertook the works which have brought the Metal Man wonderfully back to life.

Sligo’s Metal Man, is a 19th century navigation beacon which is located mid channel between Rosses Point and Oyster Island in Co. Sligo.  The Metal Man has marked the safe approach for shipping and marine craft to Sligo Harbour since 1821 and continues to do so.

Minister of State, Malcolm Noonan, T.D. at the Department of Housing, Local Government and Heritage allocated a grant of €25,000 under the Historic Structures Fund to Sligo County Council for works to conserve the Metal Man.  Match funding was also provided by Sligo County Council.

The project was undertaken as a joint effort between the Infrastructure Directorate and the Heritage Office of Sligo County Council.  The project was complex and extremely challenging due to its location mid channel, the extent of the conservation works required, as well as the health and safety and environmental requirements that had to be met.

The conservation, cleaning and painting of the Metal man was undertaken by Maintenance Painting Systems (MPS) Ltd. on behalf of Sligo County Council.  Calum Phillips, Commercial Manager with MPS Ltd. managed the overall delivery of the project from the company’s UK base.   Conservation oversight was provided by Duncan McLaren of Dedalus Architecture, while the role of Project Supervisor Design Process was undertaken by RPS on behalf of Sligo County Council.

Attendance to and from the Metal Man was provided by Daryl Ewing and Johnny Gillen of Ewing’s Sea Angling & Boat Charters, while scaffold was carefully erected by John Griffin and his team at Sligo Scaffold Hire.  Albany Decorplan Sligo together with Bradite Industrial Coatings generously sponsored the painting materials.

The Metal Man has been a source of inspiration to many, including Jack B. Yeats who depicted the structure in his painting ‘Memory Harbour”.  More recently the ‘Save the Metal Man’ campaign highlighted the deteriorating condition of the beacon and lobbied for its conservation.  Both locals and visitors to Rosses Point alike have watched the works progress on the Metal Man over the last few weeks.  It is fair to say that the project has been warmly received and everyone is delighted to see that the Metal Man has been conserved to such a high standard.

The Metal Man was previously maintained by the Commissioners of Irish Lights, but when Sligo Harbour came under the jurisdiction of Sligo County Council, the maintenance of the Metal Man was also transferred to the Local Authority.  The Metal Man, who is an identical twin to the Metal Man at Tramore, Co. Waterford, was established on Perch Rock in 1821.  The beacon has a range of 7 miles and a character of Fl (3) W 6.1 seconds that is synchronised with Oyster Island.  Since 2003, the light is exhibited in hours of darkness only.