Sligo County Council hosted a Civic Reception for the Board and membership of the Yeats Society to celebrate their sixty years of outstanding service.

In his address the Cathaoirleach said the reception was being hosted ‘to honour those special people who have served, and those who continue to serve the Yeats Society with such distinction. From the time the Society was established over 60 years ago, successive committees and countless members and volunteers have worked with passion, energy and spirit to promote and preserve the cultural legacy of Sligo’s most iconic literary figure.

Through your work, you have brought a new appreciation of the wonderful landscape that inspired and enchanted Yeats.  The unifying theme that has characterised all your endeavours is ‘inclusion.’  There may have been a time long ago when the magical world of Yeats was perceived in some quarters as the exclusive preserve of the academic or literary historian, through your efforts, this is certainly not the case today. All that is required of the reader is a sense of imagination and wonder.

The key agencies in Sligo are committed to establishing Sligo as a key centre for cultural tourism in the northwest and to celebrate and promote our cultural influence on the international stage. Any strategy to realise this ambition must be focused on the life  and works of WB and Jack Yeats.

While Jack B Yeats and WB Yeats are cultural icons of international repute, their inspiration was decidedly local. Jack B. Yeats famously remarked that he never created a painting which did not have in it "at least a thought of Sligo", and he was greatly influenced by the people and the landscape of this beautiful county.

Similarly, Seamus Heaney referred to WB Yeats’ ‘Loving evocation’ of Sligo in his works, observing that he changed the intellectual climate of the country to promote his vision of Ireland as an independent cultural identity.  While Sligo was also WB Yeats’ spiritual home, he had a universal message that is appreciated and cherished by generations of people all over the world. Through the International Summer School and Yeats Day, you encourage people to re-appraise and enjoy his work, to offer exciting new perspectives through various artistic and literary mediums.

Over the years you have ensured that the vision articulated by the Society’s founding members has been honoured, and you ensure this vision is lovingly conveyed to a new generation.

In 2017 Sligo celebrated its status as ‘European Capital of Volunteering, an accolade which was bestowed in recognition of the outstanding contribution volunteers such as the Yeats Society.  In this context, I will pay a public and heart-felt tribute to the  many volunteers who have been the heart-beat and inspiration of your Society, the discreet, modest, unassuming members we honour this evening.’

The Cathaoirleach concluded his  address by thanking the guests for their special contribution ‘All our guests in this chamber should feel a deep sense of pride  for their  outstanding work over many years, your  infectious passion and  enthusiasm  has been a cherished gift in  our community, a gift that is greatly appreciated.’ 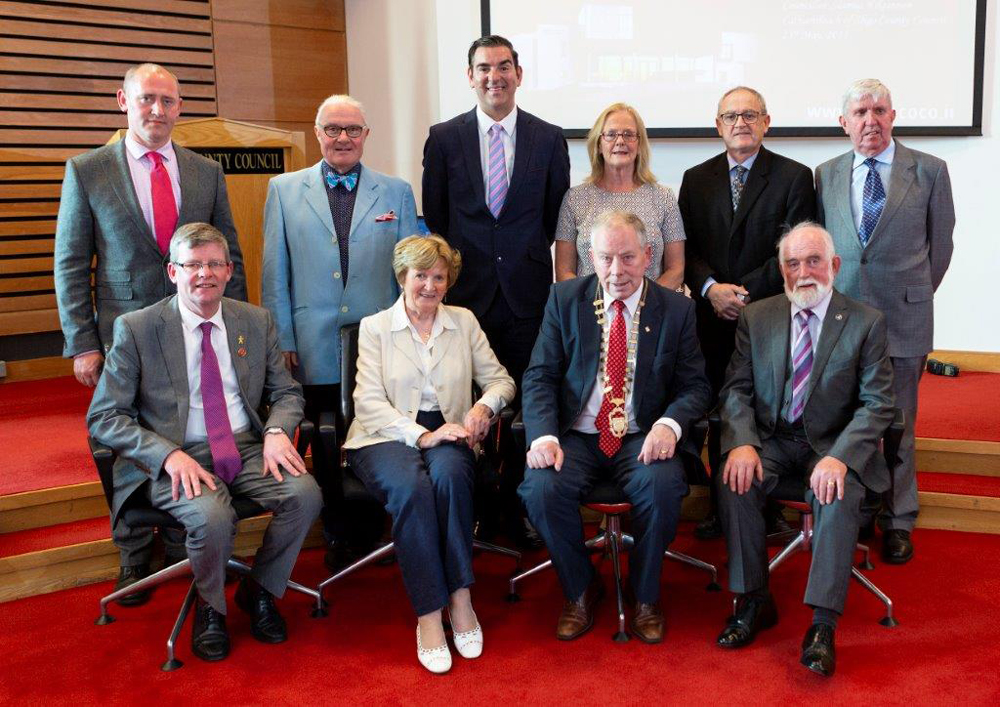 Group pictured in County Hall at the Civic Reception for Yeats Society: