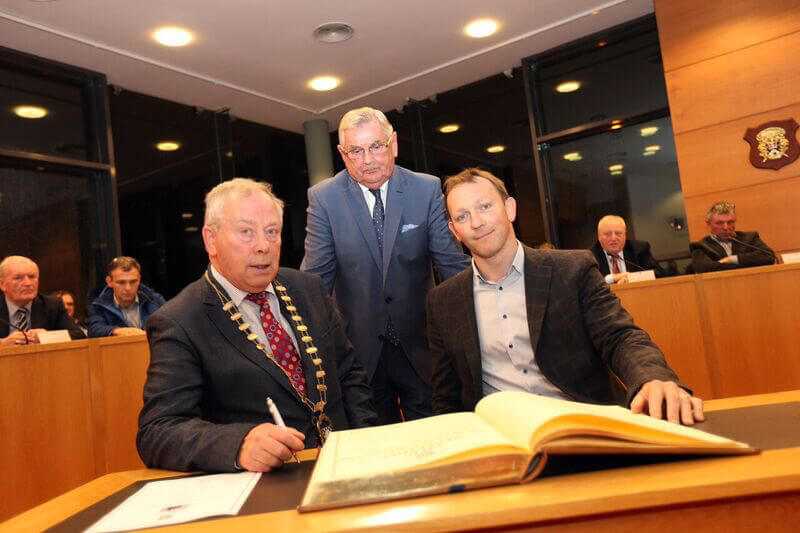 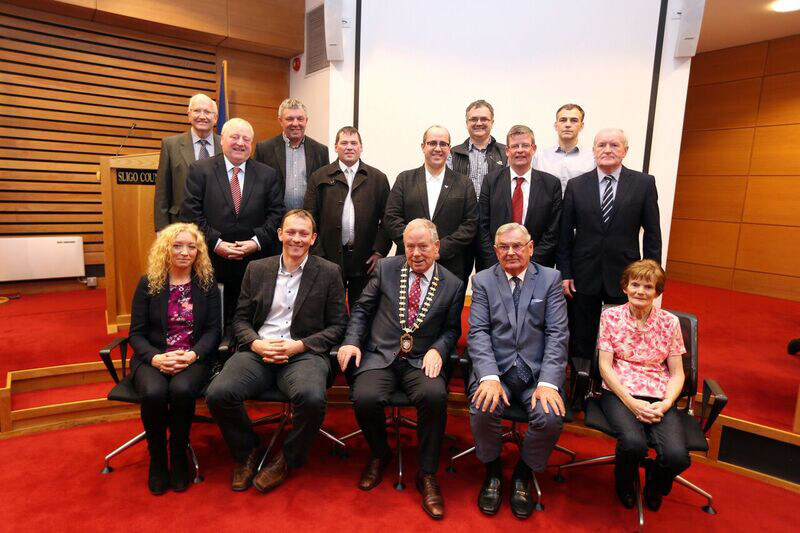 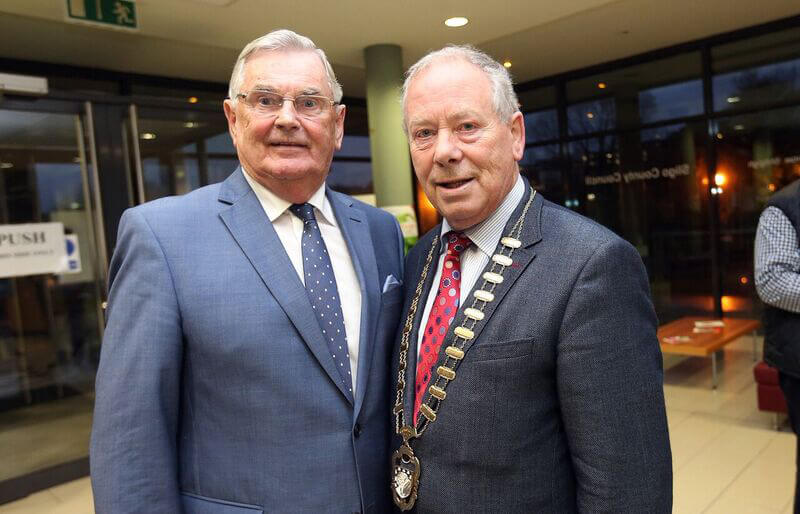 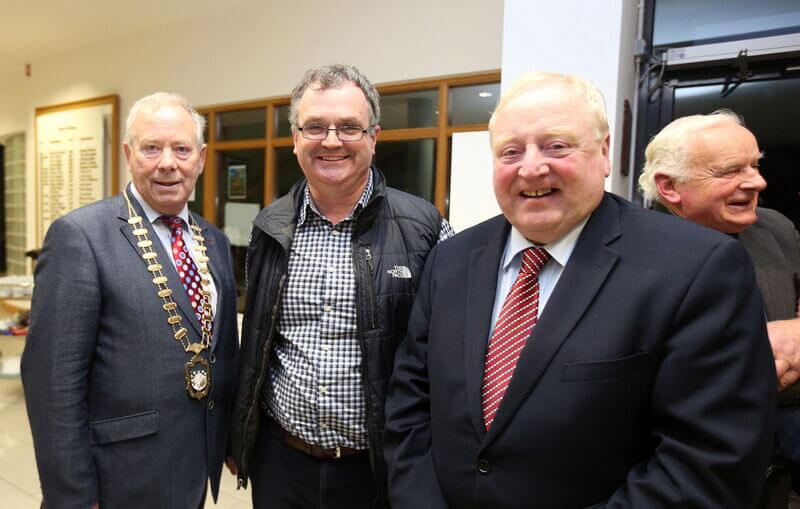 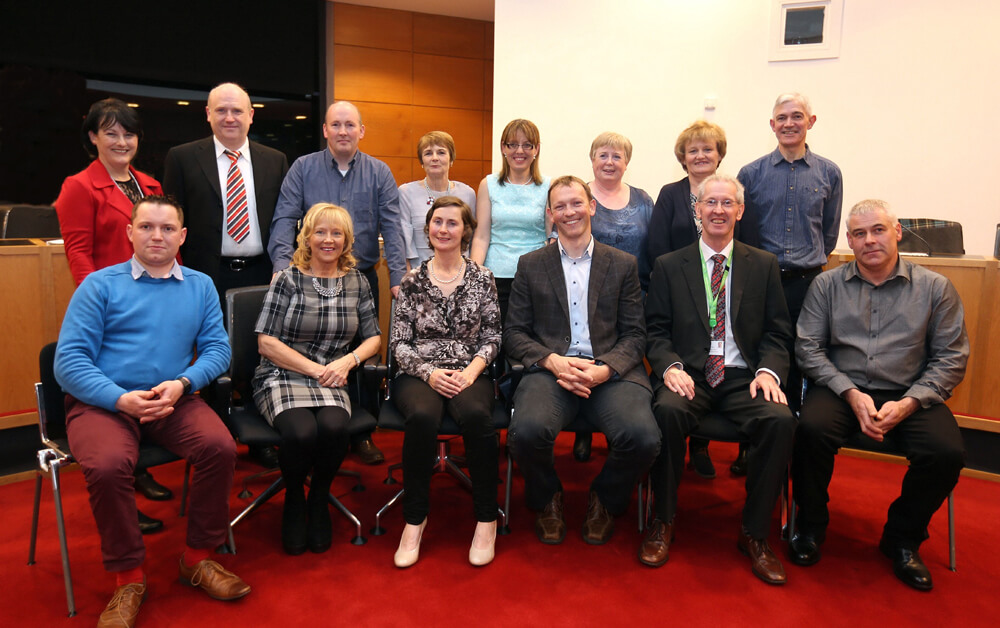 The Cathaoirleach of Sligo County Council Councillor Seamus Kilgannon hosted a reception at County Hall to honour the staff of Sligo Regional Veterinary Laboratory on the occasion of their 50th Anniversary celebrations.

The Cathaoirleach of Sligo County Council Councillor Seamus Kilgannon hosted a reception at County Hall to honour the staff of Sligo Regional Veterinary Laboratory on the occasion of their 50th Anniversary celebrations.

Among the attendance were former EU Commissioner Ray MacSharry, Senior Research Officer at the Laboratory Ger Murray, and Regional Organiser of the IFA Adrian Leddy.

In his address the Cathaoirleach said ‘The Regional Laboratory was established to assist the local farming sector, but your significance is much broader than that, and you have played a pivotal role in the social and economic life of this region, as well as providing an exemplary service to our farmers.

In this context it is a privilege to welcome our special guest Ray MacSharry, who made a decisive contribution to the farming sector throughout his distinguished political career, most notably during his tenure as EU Commissioner. It is also a pleasure to welcome other long-standing friends of the Regional Laboratory, Max Kilroy and Ray Gallagher.

On the occasion of your 50th Anniversary celebrations, it is appropriate to reflect on the history of the laboratory and to highlight its landmark achievements.  Sligo Regional Veterinary Laboratory opened its doors on 3rd October 1967, and had the distinction of being the first of the Regional Laboratories.  Others would follow in subsequent years in Cork, Limerick, Kilkenny and Athlone.  Over the last 50 years you have overcome many challenges that remain as important chapters in our country’s history – The brucellosis eradication scheme pre-dated the establishment of the laboratory by two years, but your staff played a major role in this campaign, which reached a successful conclusion in 2009 with the attainment of ‘Officially Brucellosis Free’ status in 2009.

When we reflect on the collective achievements of this special facility, we also recall with great fondness and pride those who gave exemplary service throughout their lives, people like the late Tom Feeney who passed away in 2015 – Tom worked on the building of the laboratory, and was employed by the Department of Agriculture as a laboratory attendant until his retirement in 1998.  In honouring Tom’s memory, we recognise that the loyalty and dedication he showed is reflected in the management and staff serving with equal distinction to this day.

Former EU Commissioner Ray MacSharry spoke of his long association with the staff of the Regional Laboratory, going back to the time it was established.  He played a special tribute to Max Kilroy, who had played a major role in its early days.

Ray highlighted the Laboratory’s outstanding record in disease control and surveillance, and recalled the first boat load ‘TB Free’ cattle leaving this country after its eradication was from this area.

In a wider context, he spoke of the strategic importance to the national economy of growing and developing the regions.

Senior Research Officer at the Laboratory Ger Murray, thanked the Cathaoirleach and the Council for hosting the reception in their honour, and spoke of the excellent collaboration between the Local Authority and the Laboratory over the years.