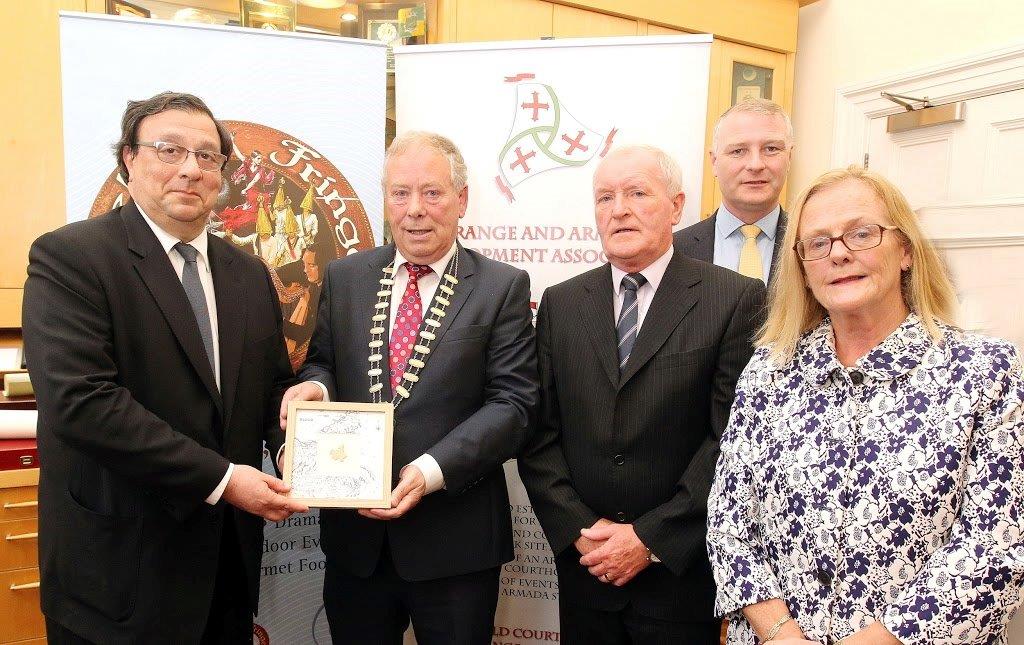 The main purpose of the Ambassador’s visit was to present a very special award to Grange & Armada Development Association, in recognition of their outstanding work to honouring the memory  of the Spanish soldiers and sailors who  lost their lives during the Spanish Armada Shipwrecks  off the North  Sligo coast at  Streedagh in 1588.

The award of the Plate of the Order of Isabel La Católica to Grange and Armada Development Association has been approved by his  Majesty King Philip VI. The Order of Isabella the Catholic is a Spanish civil order, in which membership is granted in recognition of  services that benefit the country. I it is the first time it has been presented in this country. 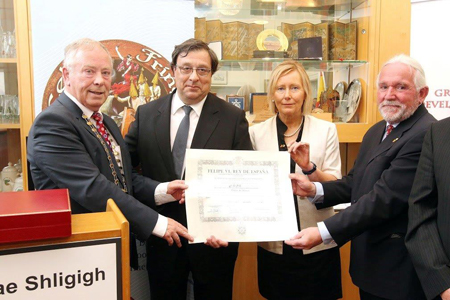 In his address, the Cathaoirleach said ‘In this year when Sligo celebrates its status as ‘European Capital of Volunteering’, it is fitting that this major international award is being presented to an outstanding group of volunteers. These events serve to enhance the very special relationship we have with Spain, which is our 5th largest tourist market, and the Spanish Navy will also have a major presence at the Celtic  Fringe Festival in October.

The presentation of  the award by the Ambassador here today is  fitting  acknowledgement  of the exemplary work carried out over  many years by the Grange &  Armada Development Association. It  reinforces the strong formal and personal  relationships that have been developed over the years between Spain  and Ireland.  The strength of this association is shown by the fact that the Spanish  Navy will once again  participate in our Celtic Fringe Festival this  year in September.

Volunteering’, this is a genuine, community-inspired endeavour.’ The Cathaoirleach also acknowledged the support of Abbvie; ‘They have been generous supporters of the Association and have been an active and energetic participant in projects in communities throughout County Sligo. ‘

While the focal point of the reception was the presentation by the Ambassador to the Grange & Armada Development  Association,  the Cathaoirleach  also invited the Ambassador to open a Book  of Condolence to enable the people of Sligo express their  solidarity and support following the tragic events in Spain last week.  The Books will be available for members of the public in Sligo City Hall, Quay Street and County Hall, Riverside.


The Spanish Ambassador to Ireland, His Excellency, José María Rodriguez-Coso, opened a Book of Condolence on Friday last in memory of the victims of the terrorist attacks in Barcelona and Cambrils.