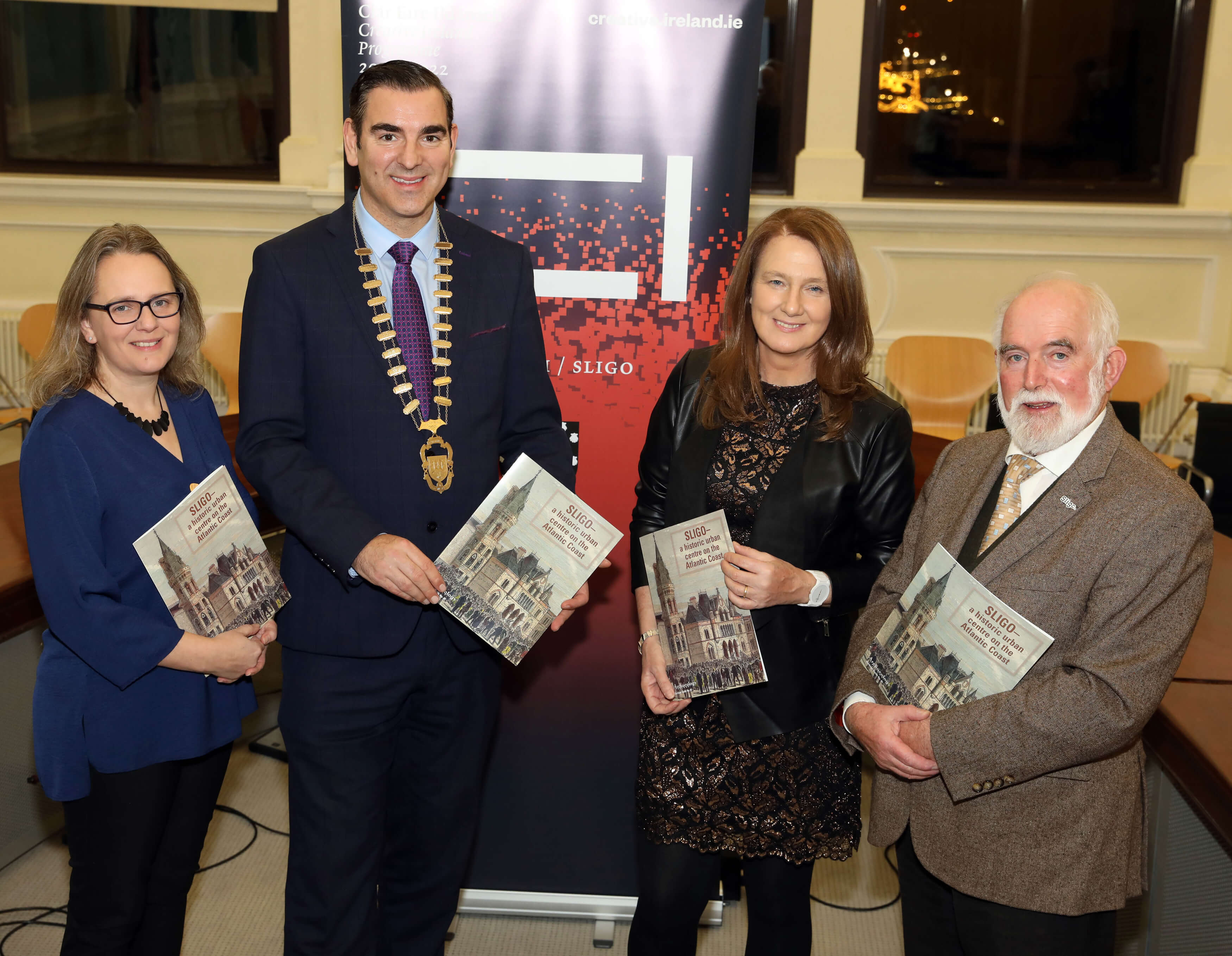 The new Archaeology Ireland Heritage Guide No. 87 ‘Sligo – a historic urban centre on the Atlantic Coast’ was launched on the 4th December by the Cathaoirleach of Sligo County Council, Councillor Tom MacSharry.

The new heritage guide traces the evolution of Sligo over nine centuries and is beautifully illustrated with drawings, maps and photographs.

In welcoming the guide, the Cathaoirleach paid a special tribute to historian and author Dr. Fiona Gallagher saying,

‘Fiona has written so passionately and expertly on Sligo over many years.  Her important work ‘The Streets of Sligo’ published in 2008, was followed by ‘The Irish Historic Town Atlas for Sligo’ in 2012, which she co-wrote with Marie-Louise Legg.  Both are important, scholarly works for anyone who wants to understand, why and how Sligo developed through the centuries, and how the historical timeline underpins and influences its future growth. The new Sligo Heritage Guide has been a labour of love for Fiona.  As a proud Sligonian, she has adeptly condensed nine centuries of the town’s history into no less than 2000 words.  Fiona’s knowledge of the subject, her expertise and great affinity for Sligo and its people has resulted in an accessible guide which will be greatly valued for generations to come.’

Councillor MacSharry congratulated everyone involved in the initiative, particularly Una MacConville and Nick Maxwell of Wordwell, Sharon Greene editor of Archaeology Ireland, as well as Tom Condit and Gabriel Cooney both series editors of the heritage guides with Archaeology Ireland.

Martin Enright, MC for the evening and vice Chair of Sligo Heritage Forum, highlighted that the new guide was the fourth for Sligo under the Archaeology Ireland Heritage Guide series.  Previous guides have included, Inishmurray, Neolithic Cuil Irra and the Streedagh Wrecks.  The addition of a guide for the historic town of Sligo was reflective of the exceptional wealth and quality of Sligo’s heritage.

‘What really comes across when you read the guide is how important Sligo has been as a key economic and trading centre on the NW coast of Ireland for over nine centuries.  We also see that the prosperity waxed and waned over time, but the ability of the historic town to adapt and quickly refocus shows great resilience and community spirit.  That strength of identity, sense of place and community is deeply engrained in the streets and people of Sligo, it is heritage in the very best sense and one that needs to be nurtured and cared for in the long term.’

Over 2,500 subscribers to the Archaeology Ireland magazine will receive a copy of the new Sligo heritage guide in their Christmas edition.  With subscribers located in Ireland and further afield, the story of the historic town of Sligo will be spread far and wide.  The new Heritage Guide is an initiative of Sligo Heritage Forum in partnership with Sligo County Council and Archaeology Ireland.  The guide is an action of the County Sligo Heritage Plan 2016-2020 and is funded by Sligo County Council and the Creative Ireland Programme. Copies of the heritage guide are available from Liber bookshop, O’Connell Street, Sligo and online from www.wordwellbooks.com.